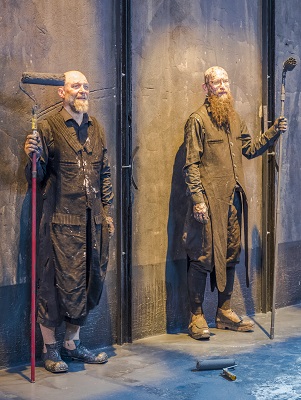 During the decades of its existence, the Engineering Theatre, having no followers or imitators, have produced over than 40 productions of various genres and forms – productions for chamber theatre spaces, site-specific and street shows, performances.

In their productions Isayev and Semchenko turn to archetypical stories (Sine Loco – the ancient myth about Ariadne and Theseus, The Cabinet of Curiosities – the legend about the creation of the world, Between the Two – the Tibetan book of the Dead, Mr Carmen – the novel by Prosper Mérimée, Faustus in the Cube. 2360, Faustus. Signature – the legend about doctor Faustus), classical stories (Shchedrin – the Chronicles of Dead Mayors based on the novel The History of a Town by Mikhail Saltykov-Shchedrin, Foam of the Daze based on the eponymous novel by Boris Vian, Macaria’s Archive based on Goethe’s novel Wilhelm Meister’s Journeyman Years and etc.) and also use their own texts and scripts (The White Cabin, Pookh and Prakh, Filling the Gaps, Gobo. Digital Glossary, The Catalogue of the Hero, momentary cabaret Gloria Transit).

AKHE talks with the audience using the metaphoric language of visual images, appealing to associative perception. The method of Isayev and Semchenko is based on improvisational interaction with the object, which, during the entire course of action, experiences various metamorphoses. Communication between the characters, as well as the characters and the audience, happens through contact with the object. The process of creating stage microcosm for the Engineering Theatre members is also the result of this process. In order to convince the audience that their world is genuine, they mystify the surrounding reality, showing its secret facets – invisible for the Philistines, yet seen by the eye of an artist.

The Depot of Ingenious Delusions – 2012 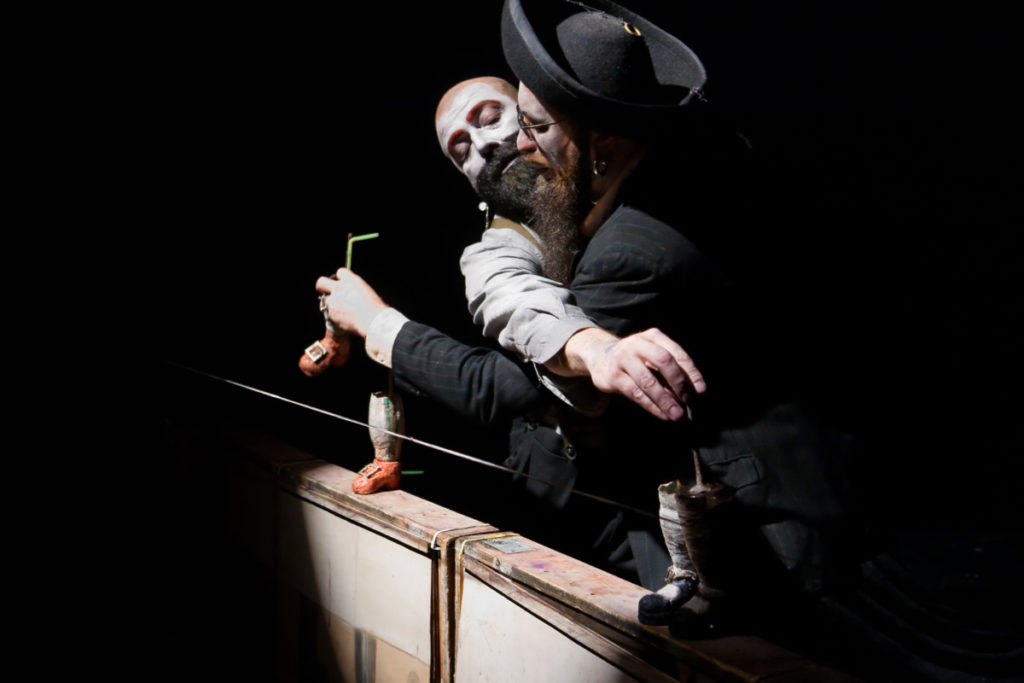 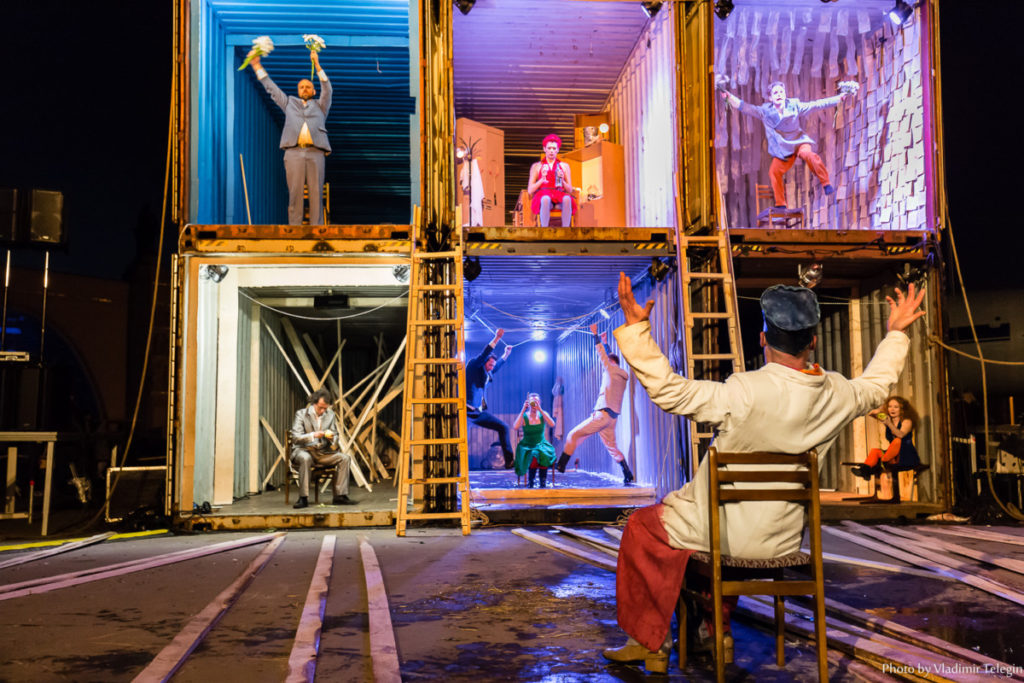 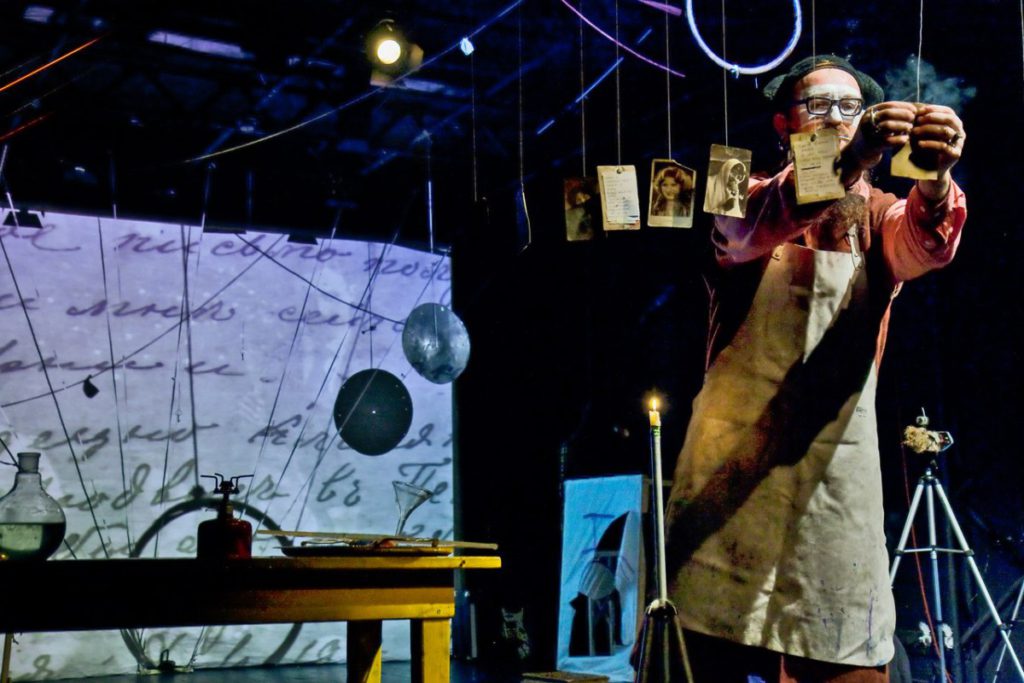 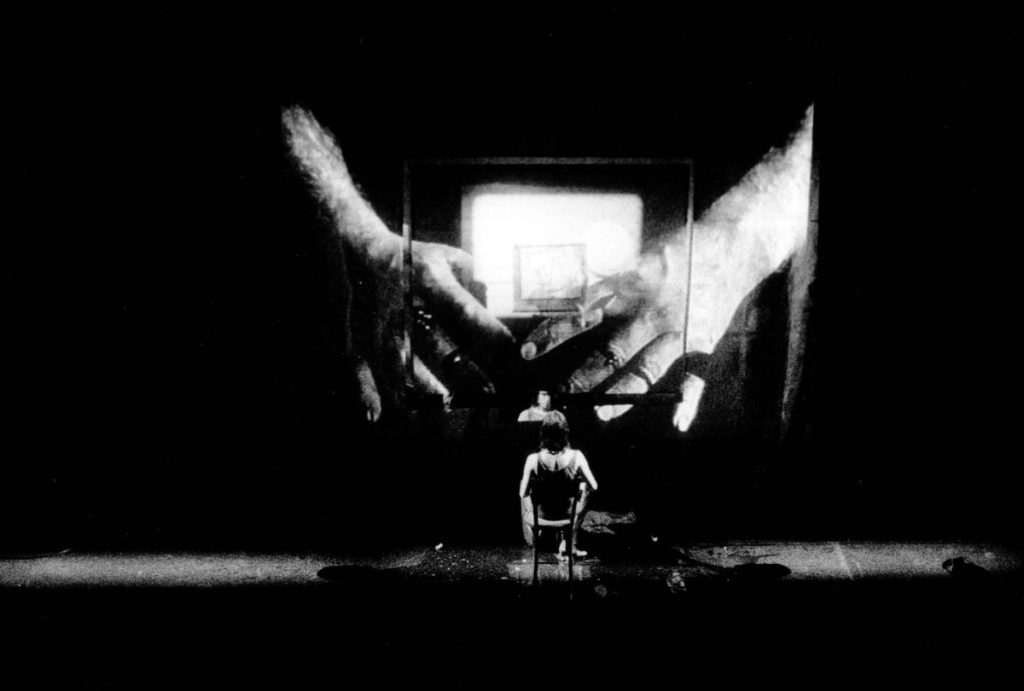 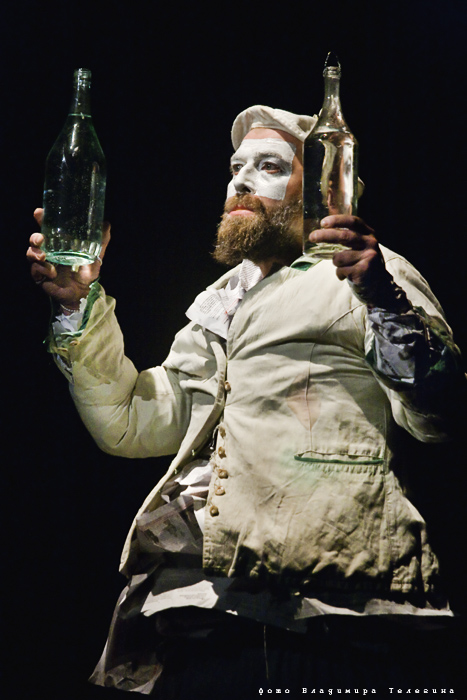 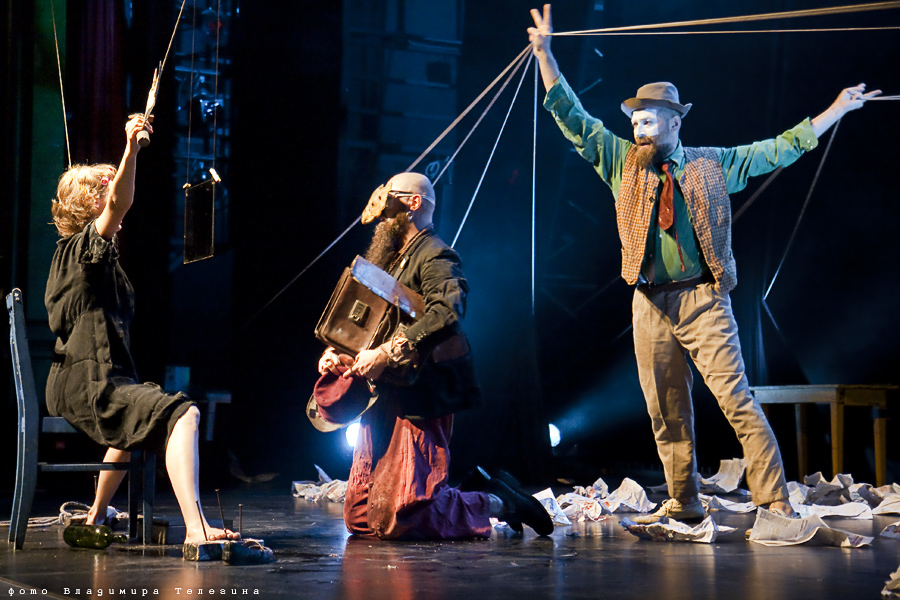 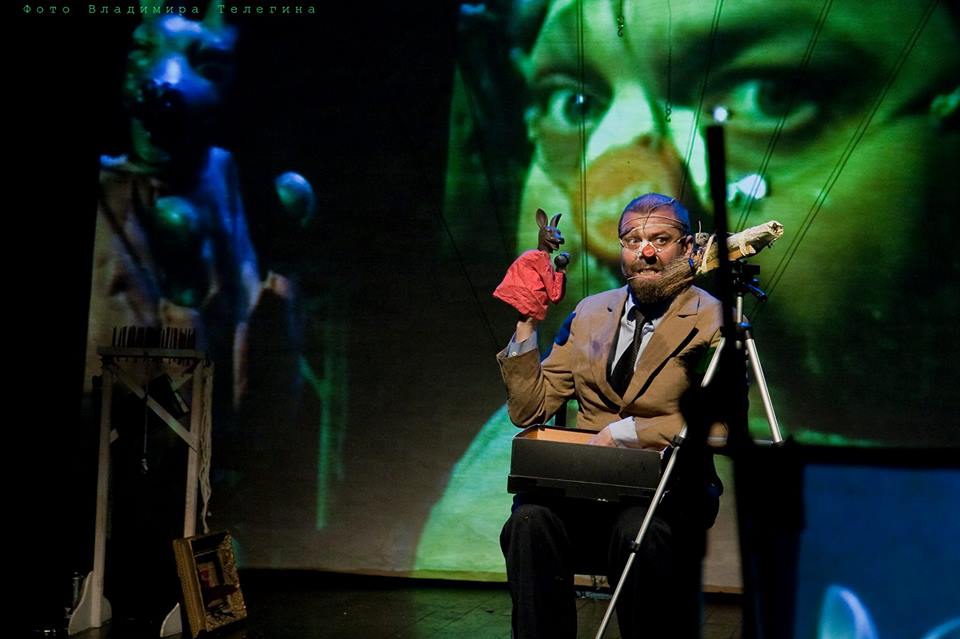 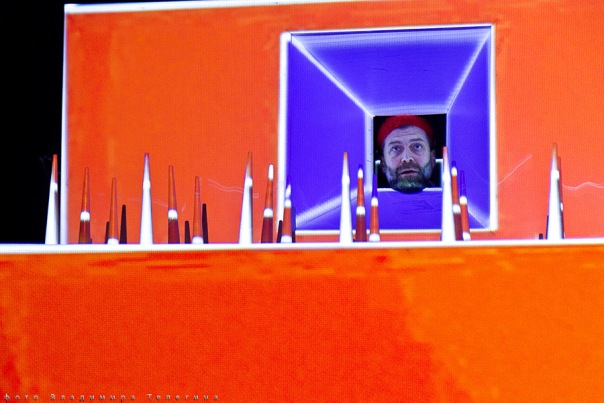 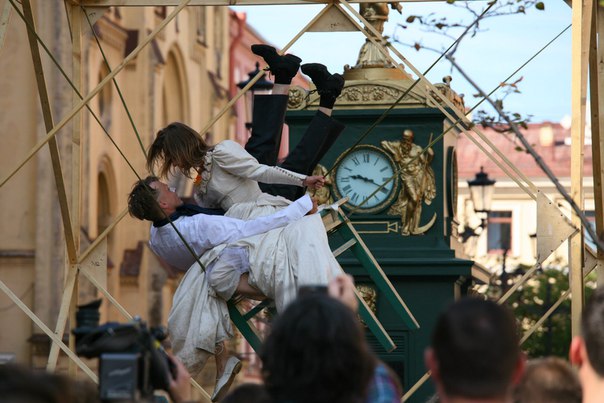 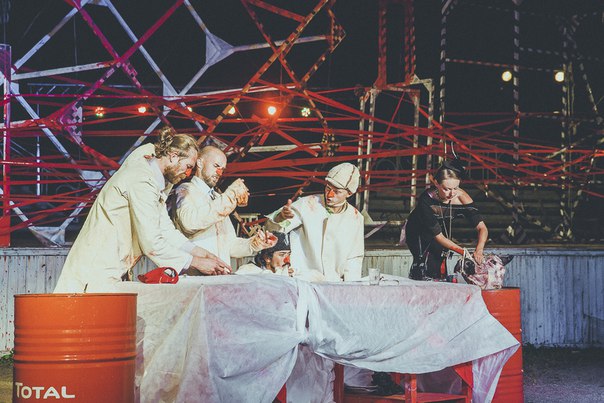 «
»
“Theatre IS the ritual. If you buy tickets, come to the theatre, and watch what is happening on stage, this is already a ritual action, no matter what is happening there. The other thing is the quality of that ritual which can be bad or good. Also, in everything we do there is a powerful social subtext, and the one who wants to see it can see it.”
Anastasia Mordvinova, "Sobaka"
«
»
“Although we are dealing with non-textual theatre, we have dramatic structure anyway.
I am still positive that on the level of concept theatre can not exist – as it can not exist without the audience…”

Kristina Matvienko, "Theatre times"
«
»
“… we entered the theatre through a different door – through the door of costume, set, and props workshops. That is why we are a theatre from another angle. We are using those means of theatre which are dear to designers, such as: space, the dynamics of the changing of scenes, colors, light, sound – because a contemporary synthetic artist is influenced by total art, which includes all of these instruments, all the means of impact on all sense organs.”
Pavel Semchenko, blog about the arts
«
»
“In fact, the word ‘engineering’ in our title seems more of an echo of the 19th century, of the classical Russian theatre and classical Russian literature, of the independence of man who somehow understood how it was possible to approach the possibility of taming the elements – fire, water, air, and stones – with the help of his or her will and mind. To build a steam train, to move a large rock by means of a lever without ceasing to be a part of nature and remaining an unexplainable creature. Besides that, we came to the theatre from the side of the workshops, where, once again, mechanisms, kinematics, lighting, sound play a major role. Perhaps there is even a hint of that childish wish to play with matches, to stick your fingers into a socket. Perhaps we have not had enough of that in our childhood. The combination of these three situations allows us to refer to ourselves as engineering theatre.”
Pavel Semchenko, blog about the arts
Mass Media Feedback: 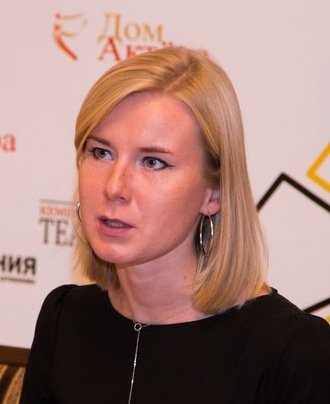 “Isayev and Semchenko poeticized in theatre those fields of human knowledge which were traditionally perceived as totally non-poetic, such as physics, chemistry, mechanics. In their early productions they actively used their own engineering inventions, all kinds of textures. <...>. In the forming of AKHE’s specific style the artistic milieu of St. Petersburg of the late 1980s and early 1990s, the obsession with avant-garde and modernism played an important role. One of the greatest influences on AKHE members was Boris Ponizovsky, one of the key figures of non-official culture who gathered people around him, inventing and creating his own small theatre universe.”

“… productions are based on the constant play between the seeming and the real, the concrete and the abstract, the idea and the form, on the juggling with truth and ostensibility. Reality and mirage are constantly interchangeable.”

“They are called demiurges, alchemists, hooligans, DIY guys, and even godmakers. They call themselves “operators” and “architects of space. <...>. “AKHE is a group, in which the process of creation, not the result, is elevated to the level of artistic phenomenon. AKHE is a theatre company, the members of which do not perform any roles, do not imitate anyone, and barely speak. Here they act. Two bearded ‘engineers’-actionists (who are often joined by professional actors) are creating – or, vice versa, destructing – entire worlds in front of us. The only law which governs the action in AKHE’s early productions: everything that is on stage or enters it – the man, the thing, the sound, the light (shaken, stirred, soaked, set on fire) – should inevitably change, transform, or combine in the most unexpected way”. 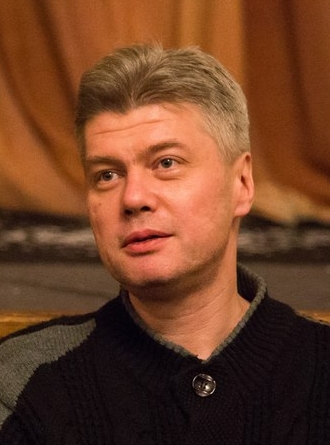 “Genre range of AKHE is incredibly wide, but in its basis it is still a theatre-performance, a theatre of objects, in which even the most unexpected objects and substances can act.” 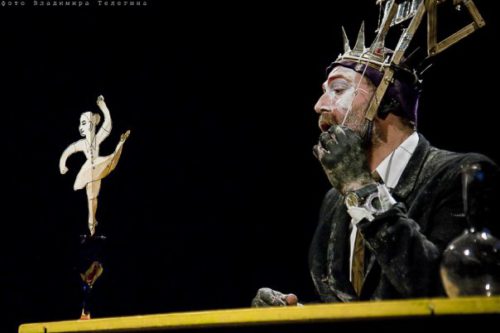