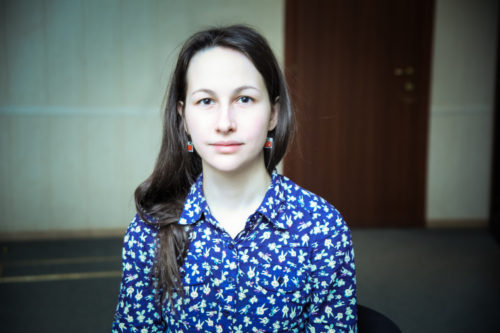 Actress, director, designer. Graduate of RATI (GITIS) (workshop of E. B. Kamenkovich and D. A. Krymov, 2012). Alexandra was nominated for the Russian National Award THE GOLDEN MASK.

As a designer, she worked in Moscow and regional theatres, including the Moscow Art Theatre named after Chekhov, Perm Theatre of Opera and Ballet, Shkola Sovremennoi Pyesy [The School of Modern Plays], Ermolova Theatre, Theatre.doc, and the Platform project.

Alexandra was nominated for the Russian National Award THE GOLDEN MASK in the categories Experiment and Drama: Work of the Designer (for the production Camera Obscura,  2014) and Proryv [Breakthrough] theatre award.

Winner of Textura-2012: Look of Today prize for set design for the production The Pagans (director V. Popova, in collaboration with M. Kukushkin; Drama Theatre of Prokopyevsk).

I am Creating the World – 2014, The House of Fanny Bell theatre, Moscow

The Happiest Octopus Ever – 2015, in collaboration with Ruslan Wolfson. Independent project, Moscow

The Music of Steps – 2017, Philharmonic-2, coproductions with Baby Lab, Moscow 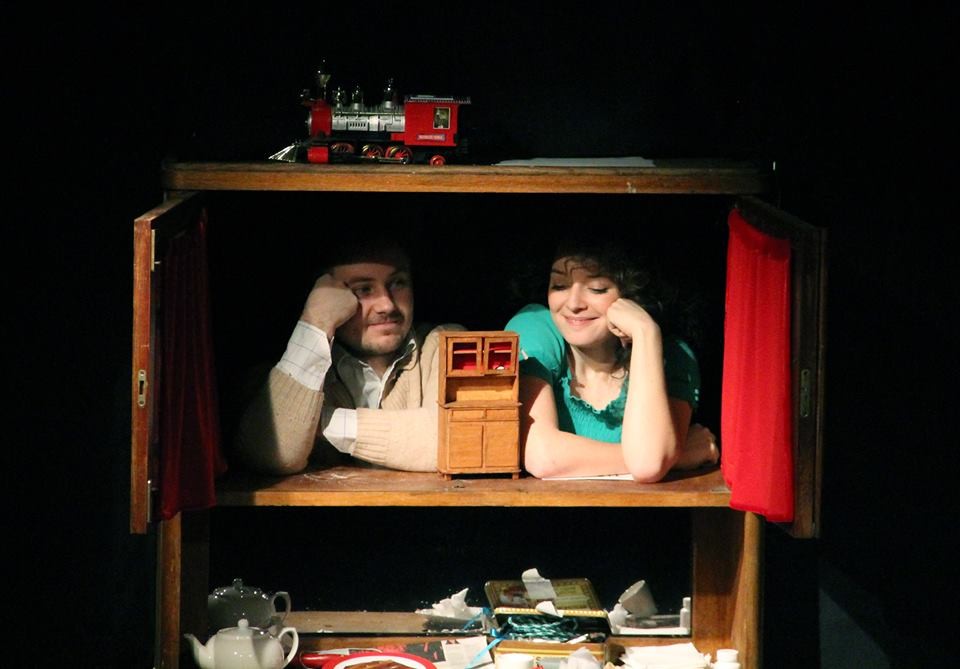 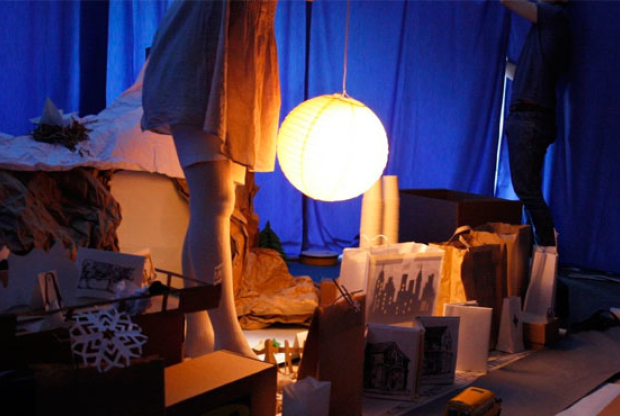 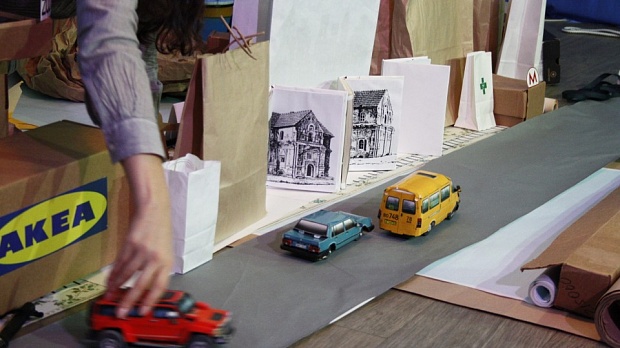 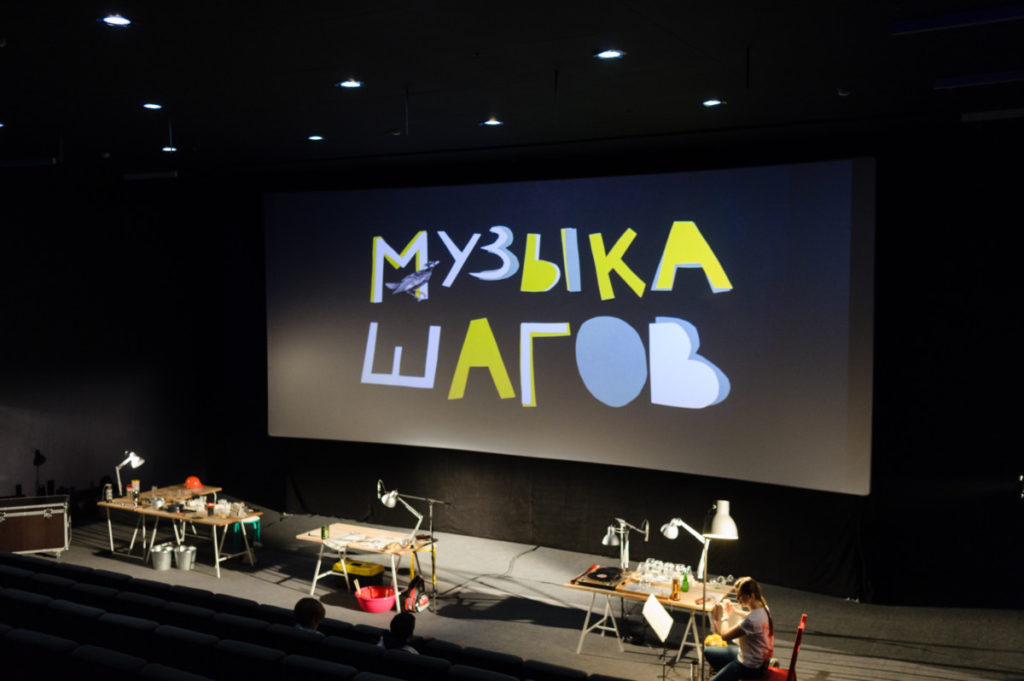 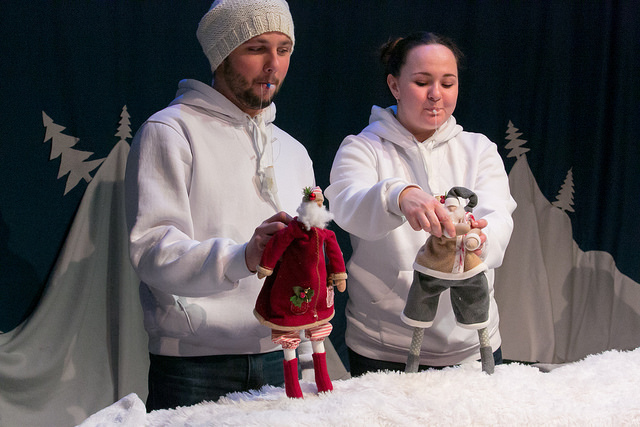 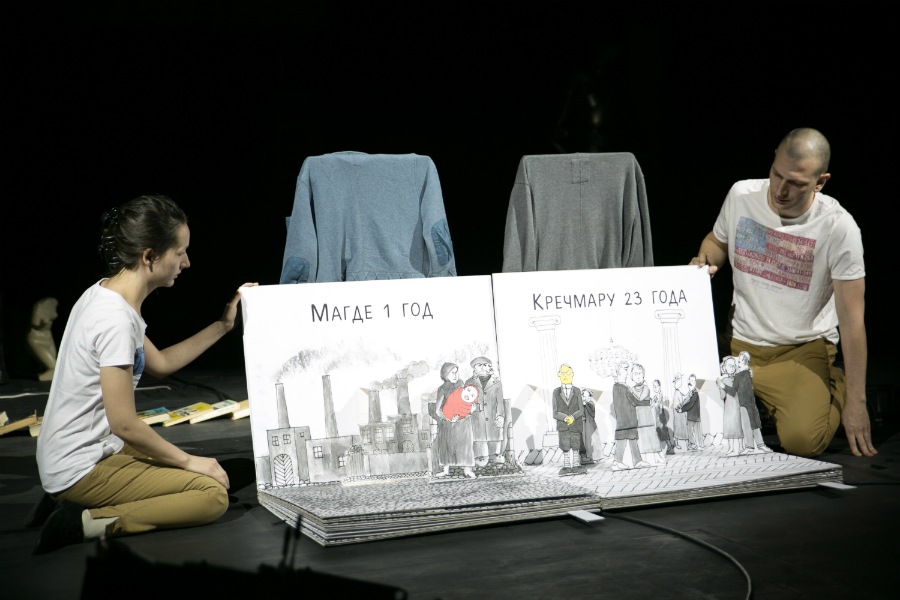 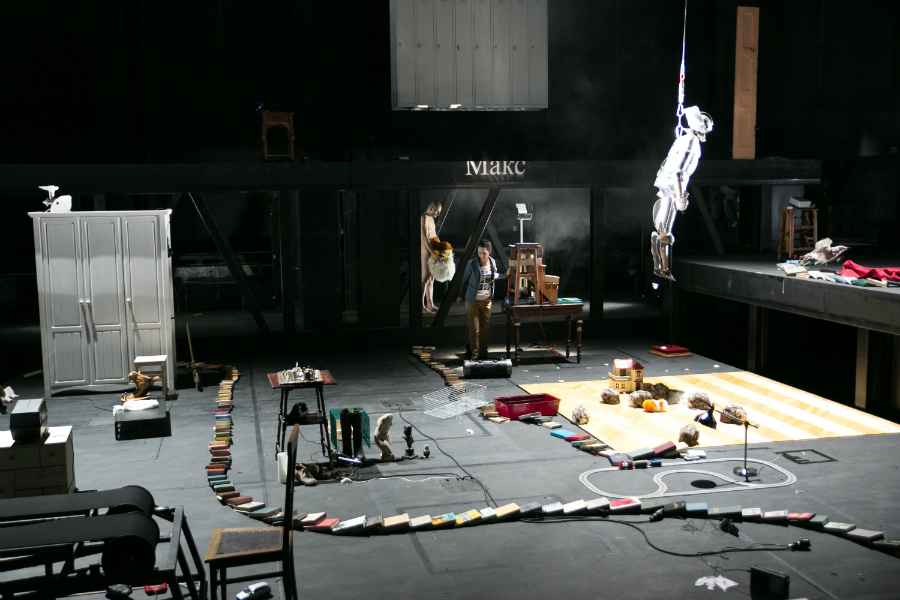 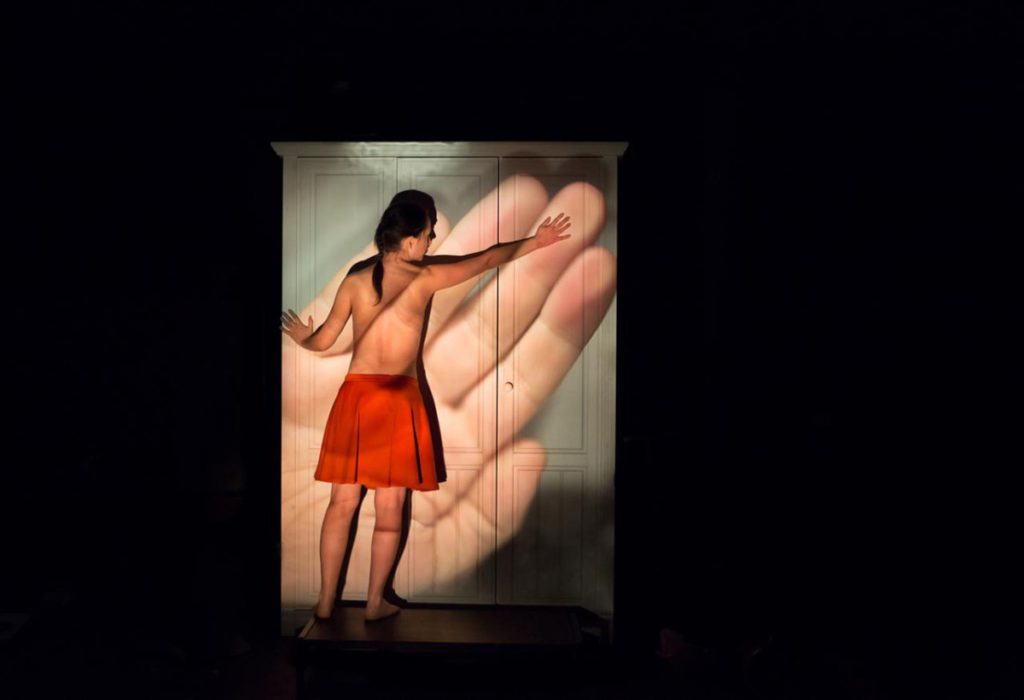 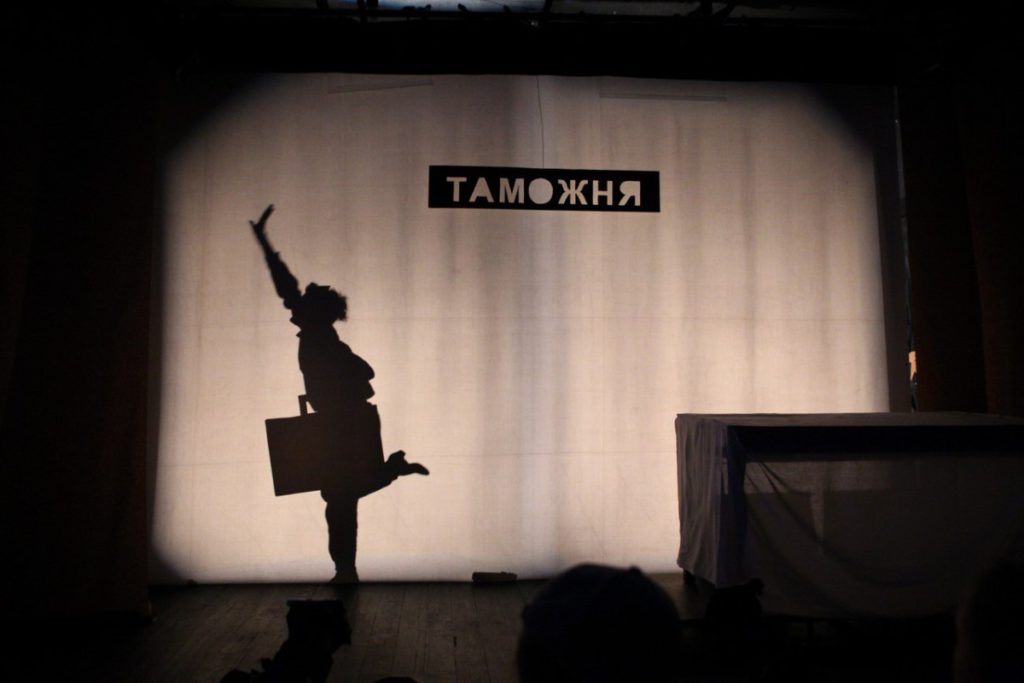 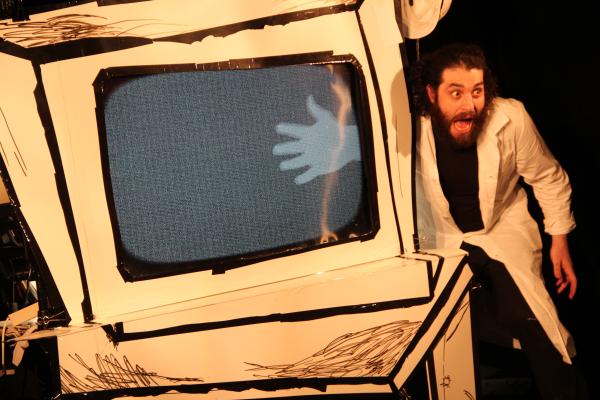 «
»
”…today, the world around us includes contemporary art, TV series, and Facebook. However, in theatre this is barely used. It seems that we are pretending not to use mobile phones. If an accident happens in the street, a crowd immediately forms around it and starts shooting it with cameras and uploading videos to the web. Like I said before, theatre is very inert, and even if certain signs of modern life appear in it, this happens in baby steps.”
Anton Khitrov, "Teatral" [Theatre-goer]
«
»
Productions "I am Creating the World" in the House of Fanny Bell and "Kitchen Concert" in the Theatre named after Natalia Sats with the support of Baby Lab represent theatre of the artist for children. This is not a way of self-realization. I just know something this child does not know and am capable of telling him or her about that. For example, I could tell a child that music can be generated from anything in the kitchen, and by pouring water into glasses in different ways you can also generate specific notes. Adults do not know that either – or seem to have forgotten about that.
Maskbook
«
»
“That is the kaif of theatre of the artist: he or she gives the audience a new way of looking at theatre. Perhaps this is the overall meaning of theatre. We have grown accustomed to everything. ‘Chekhov, The Seagull – ah, we get it, people in light-colored clothes, wicker furniture, sadness and anxiety. […] Then you come to the theatre, and it turns out that you do not really know anything. And, what is most important, in the theatre you can feel something that you would never feel in ordinary life. You can understand something about yourself, about those around you. This works in the same way in theatre for children and adults.”
Maskbook
«
»
“Theatre is not only productions. We need live communication: discussions, round tables. It would also be great to conduct lectures or show videos of productions, which we would never see on our own, or invite experts, who watch theatre across Russia… Otherwise, we could invite children’s psychologists, who could tell how children’s reception changes. It is important to unite people, who in their everyday life would not be able to meet and talk to each other. We are all creators, everyone is doing something in his or her corner, and if we do not have children, we would hardly go to a children’s performance, preferring to have extra sleep in the morning.”
From the interview to "Karabas" festival

Education: In 2012 Alexandra graduated from the first experimental class of D. Krymov and E. Kamenkovich at the director’s department of RATI (GITIS), majoring in set design.
In 2013 she got her MA Degree studying under K. Serebrennikov in the Moscow Art Theatre School. In 2014 she participated in the project The School of Theatre Leader.

Productions in Puppet Theatre
KukCafe At Shakespeare’s, The Encyclopedia of Dragons (Theatre Tenj), Yana Tumina Kolya’s Composition (director Yana Tumina), The Odyssey (director Alexei Lelyavsky), Shakespeare-Laboratory by Ruslan Kudashov and Yana Tumina (I am not sure if it is puppet theatre, but I liked it a lot), Evgeny Ibragimov’s production When I Am Little Again.
Jordi Bertrand – Jumper, Sophie Crock – House, Rod Burnett – Punch and Judy.

What would you like to stage in puppet theatre and why with puppets? In my opinion, puppets are the best format for baby theatre, which I am dealing with a lot. In baby theatre it is important that the production looks like a game, so that children would be able to repeat something similar at home and develop their imagination. Therefore, ideally, what we need in puppet theatre is not just puppets, but puppets made of materials at hand – paper, fabric – or ready toys from the store. Directing baby productions I do not always draw from a book or a fairy tale. Sometimes it is much more useful to draw from material, texture.  For instance, to stage a production about a tree – where a wooden ship would sail through the sea of sawdust, and on the beach there would be trees made of real branches. Otherwise, one could stage a production, using folk rag dolls, using the sound of whistles and other folk instruments. Also,
I want to create a production about New Year in the same format: it is interesting to adapt winter motifs and New Year paraphernalia for baby theatre.

Also, for a long time I have wanted to direct an ‘adult’ production with puppets. I have been thinking about the myth of Minotaur — I want to tell it from the point of view of Minotaur himself, starting with his birth and ending with his imprisonment in the labyrinth and subsequent death.  A lot of things in this story can not be shown through the means of drama theatre: for instance, a child’s growing up and coming-of-age. Yet, for example, for shadow theatre this is a perfect story.

Another idea I have lived with for a long time, — to direct a show about the war. This important subject has not been sufficiently mastered by our theatre. In my opinion, the scale of war can only be presented in puppet theatre. Only in puppet theatre one can show battlefields with trench lines, bombed houses, a large number of casualties and other horrors of war.

Is the expression “puppet theatre” still relevant today? Puppet theatre, similarly to other forms of theatre, is understood today in a much wider sense than 40-50 years ago: it includes work with ready-made objects, elements of drama theatre, movement-based theatre. However, the term itself is quite relevant: if in the center of the performance there are animated characters, this unmistakably is puppet theatre, and it does not matter whether these puppets were made in theatre workshops, bought in the shop, or cut out of paper during the course of action.

What, in your opinion, is the difference between puppet theatre in Russia and the West? In Russia a puppet theatre is, more often than not, a state permanent repertory theatre with directors, acting company, etc., in the west it is a small independent group of people, performing at various festivals. Usually, in such companies there is no director per se, director’s work is done by an actor. Unfortunately, one can often tell this, watching the performances. On the other hand, western puppet theatre is more versatile: in our theatre the history, the narrative are still the cornerstones of the production, whereas this is often not the case in European theatre.

What is useful about collaboration and cultural exchange? We could have learnt from Europeans a freer, more inventive approach to the genre, find out how they work with ready-made, how they use animation elements, etc. We could have taught them the importance of directing in puppet theatre: often, in western productions the potential of a certain idea is exhausted in the very first moments of the production, it stops developing, and the audience loses interest. 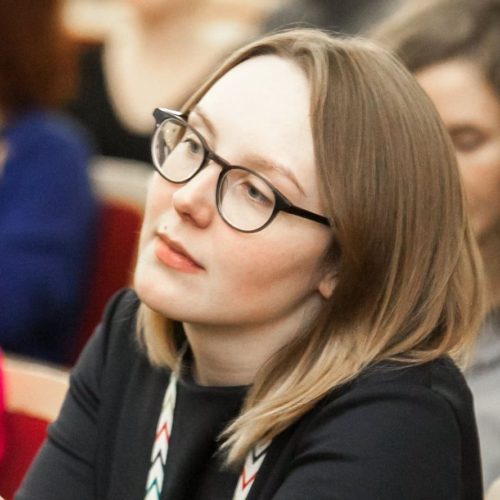 “The plot of the production is creation of the world from paper. We see how enormous white pieces of paper turn into the snow-covered icebergs of Antarctic, which are replaced with mountains, forests, and after that villages and a town appear. Afterwards, the actors together with the audience go to the sea to camp. The children learn to make birds, field glasses, and tents from paper, and install those on the playground. Meanwhile, their parents recall how easy it is to interest a child in a piece of paper thus saving some time for themselves…”

Sofia Kozich about "I am Creating the World"

“Here the basis of the story is the following: how objects from a mother’s bag turn into animate creatures and start living an ordinary life. […] Again, a master-class for mothers is hidden in this production: how, with the help of your bag’s contents, you can create fairy tales for children.”

Sofia Kozich about "I am Creating the World"

“ ‘A sequence of pictures’ – this is not just a figure of speech. Vera Popova, Alexei Lobanov, and Alexandra Lovyannikova made an emphasis on visual reception, having created a production-puzzle from images and symbols, referring us to Nabokov’s novel and/or illustrating it. The audience’s task is to reconstruct the entire chain of events from these loose links.”