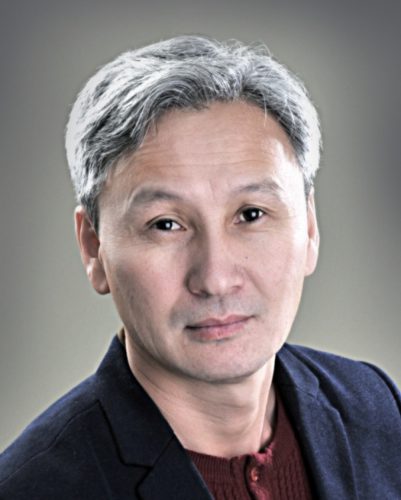 Winner of the National Theatre Award THE GOLDEN MASK (In the Eternal Light of Kumalan, 2010), director of the International Festival of Puppet Theatres The Path of Nomads. Erdeni worked as an actor in drama theatre and independent projects, taught at Buryat studio of the department of puppet theatre of SPbGATI.

He often writes texts for his productions, some of the best known of which are based on national Buryat epic and harmoniously combine in them the unhurried rhythms of the myth, unexpected metaphors, natural materials on stage, and respectful humor.

9. Syner. The One Who Speaks with the Wind — 2017, Buryat Republican Puppet Theatre Ulger (Ulan-Ude, Russia) 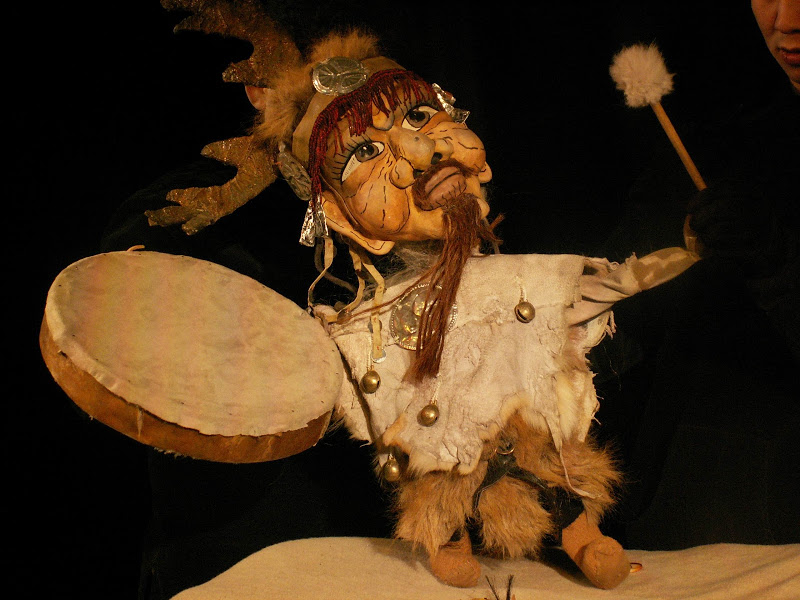 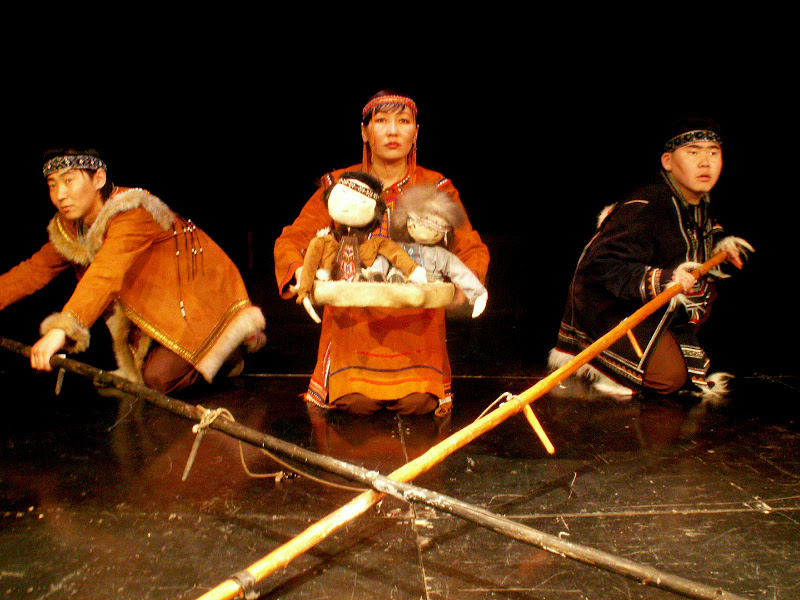 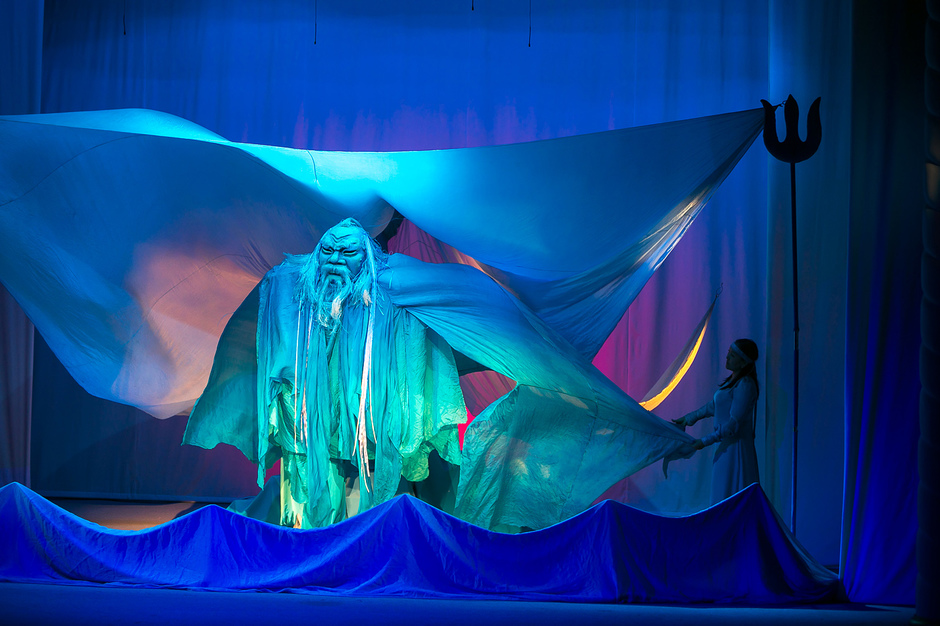 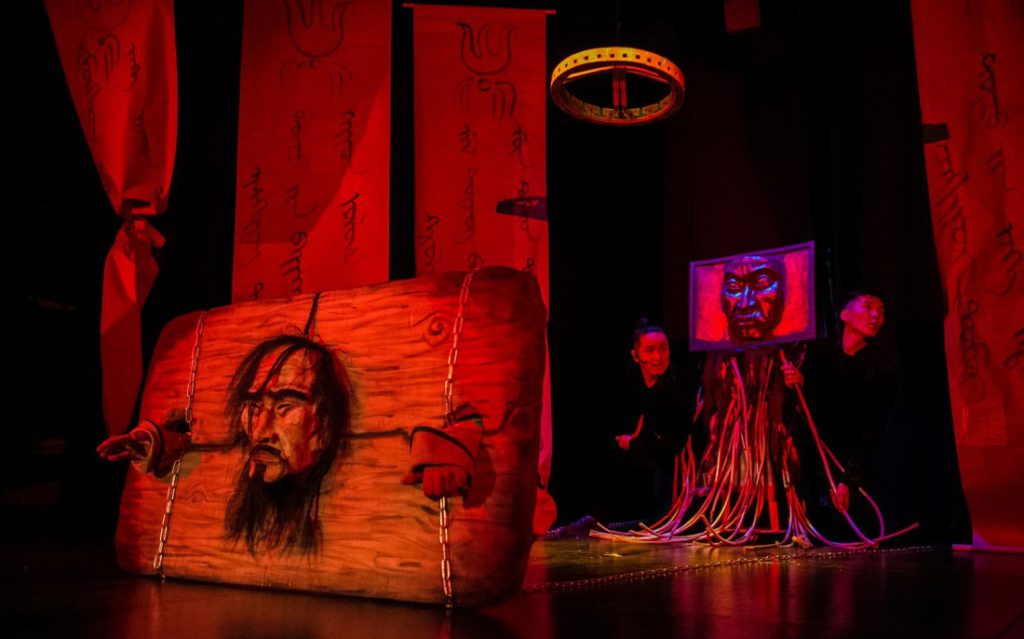 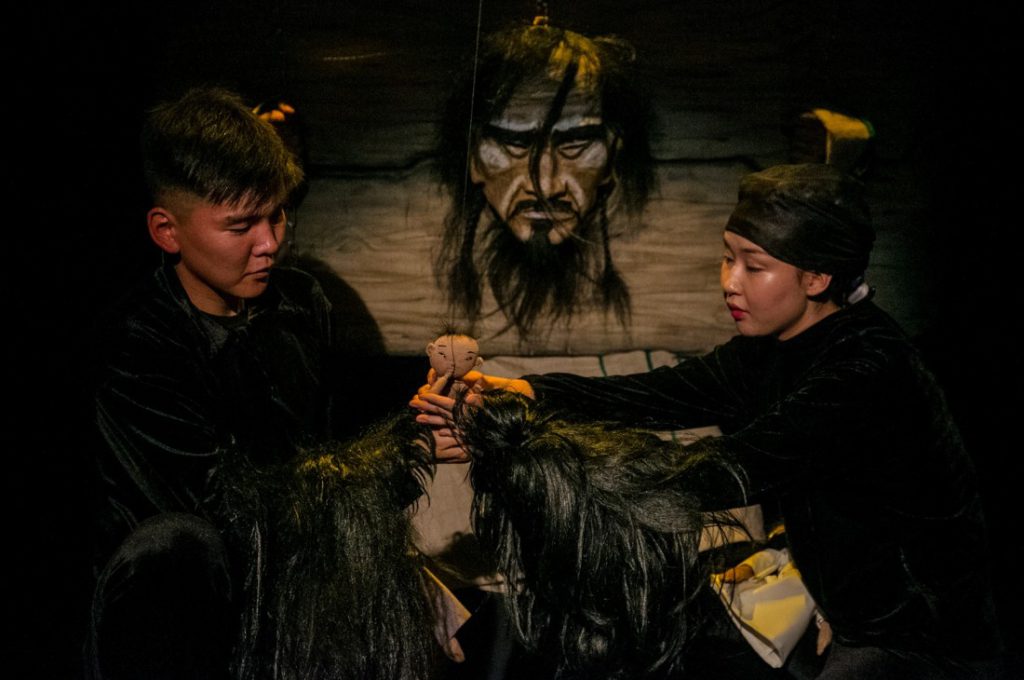 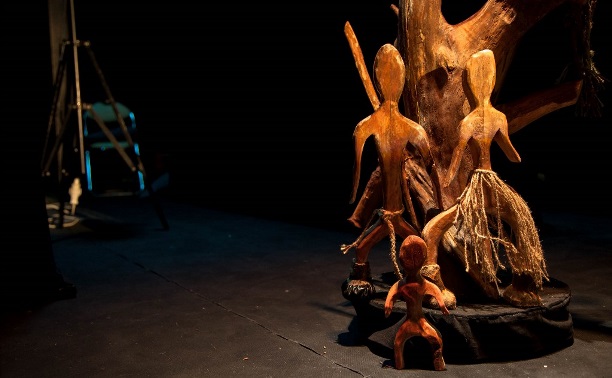 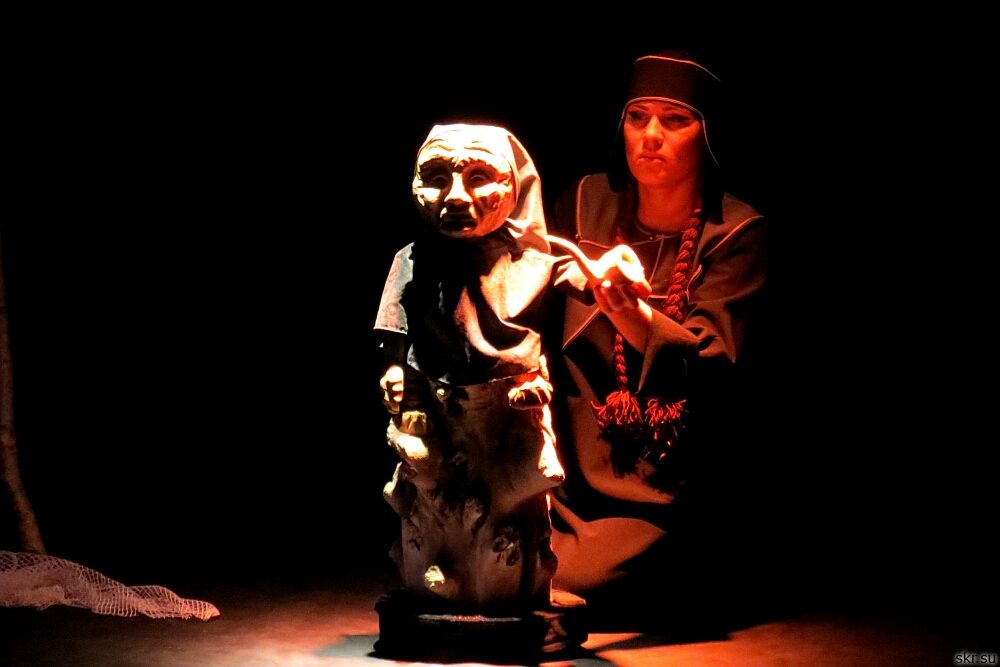 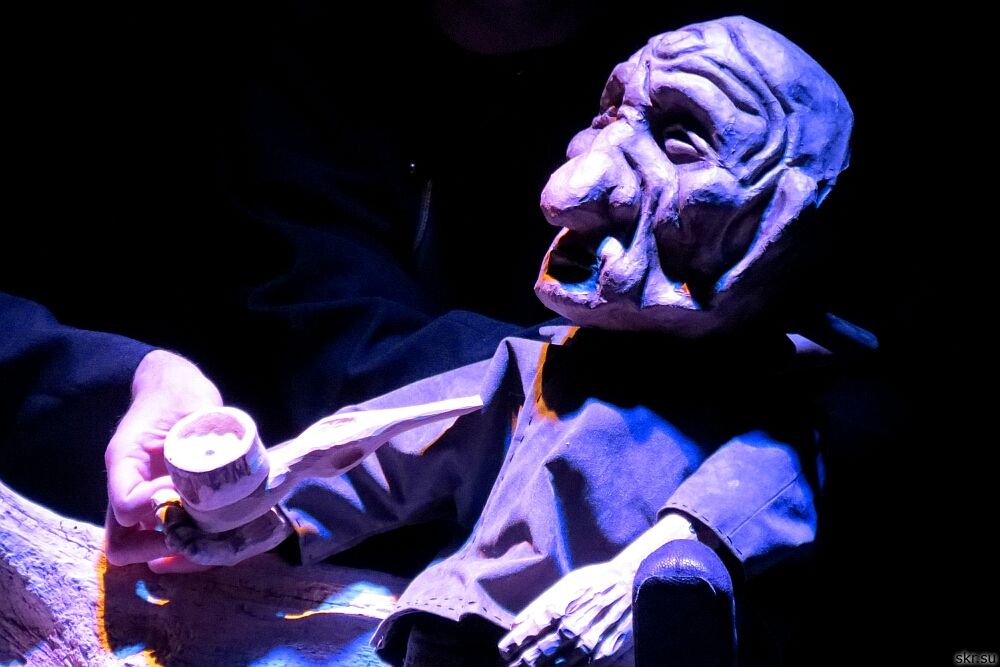 «
»
“I do not like it when a puppet talks a lot – this is not my kind of thing. Sometimes in an action – silent, full of meaning – the words are not needed. I like to work with symbols, metaphors…”
Sergei Omshenetsky, portal ASTV
«
»
“The title of the production, The Song of Ykh Myth. The Loneliness of Gods, contains the idea, the purpose, which brought me to Sakhalin and which I wanted to share with the audience. We are gradually forgetting living traditions, we no longer understand the language of Gods. Not so long ago people closely communicated with divinities, spirits, they understood, for instance, the language of animals, they were part of this nature. Today the man has disengaged himself, he has become a consumer – the nature is supposed to give, give, and give. However, the man does not give anything in return. This is bad. The balance between the nature and the man has been destroyed.”
Sergei Omshenetsky, portal ASTV
«
»
“One of the important activities of our theatre is, by means of theatre productions and special programs, to attract the attention of children and adults to traditions, language, to get them interested, to instill in them love for the priceless gift, which our ancestors had accumulated for centuries. I am trying to have more productions in our native tongue.”
"Novaya Buriyatia"

Date and place of birth.04.1967, the Republic of Buryatia, Dzhida district, the village of Nizhny Torei.

In a nutshell, please tell us about your career.  In 1988 I graduated from LGITMiK, class of V. V. Petrov, majoring as drama theatre actor. Since 2000 I have been the principal director of Buryat Republican Puppet Theatre In 1998-2000 I taught acting at the class of S. D. Tcherkassky – Buryat studio of puppet theatre acting. For the last 7 years I have been the artistic director of Buryat Republican Puppet Theatre Ulger.

Favorite authors, subjects, stories. I stage productions based on legends, myths, and folk tales of different peoples of the world. In particular, I am interested in the myths of small, disappearing peoples of Siberia and Far East. The stories I choose are as follows: ideas about the descent of the man and creation of the space, the universe, relations between the man and the nature.

Does a performance need text? The text is not needed, because the puppet itself carries information. A puppet is a metaphor. Every movement of a puppet is a sign, symbol, a Buddhist MUDRA.

“The story of a puppet production is simple and eternal: the battle between good and bad, light and darkness. Within an hour, it unravels on stage, turning into a global story of the entire humankind – through the lens of legends, tales, and beliefs of the Evenks, one of the most northern peoples of Russia. Erdeni Zhaltsanov directed a fairy tale about the harmony of relations between the world of people and the world of animals. That is what the fairy tales of the Evenks tell about – people are children of nature. The man in this production is represented as a particle of the Space.”

Valentina Borokhova about the production "In the Eternal Light of Kumalan"

“The production of the puppet theatre from Buryatia, already well-known in Moscow, is based on a legend of the Evenks. For them, kumalan is not just a usual rug in a chum. Often made from reindeer skin in the shape of the sun, it can contain the shamanistic knowledge about the upper and the lower worlds. The production of Erdeni Zhaltsanov tells how an ancient hunter and his wife wade through the deep waters of the sacred lake Baikal. On the other bank they ceremoniously build a chum, their children are born, who are being stolen by an evil spirit, who has been living here before the arrival of the man. The hunter’s duty is to bring the lost child back from the underworld. The authors of the production remember that they are narrating a myth, therefore the world on stage is being born virtually out of nothing. The actors themselves are capable of imitating movements of animals; the puppets, performing the children’s roles, look like ethnic toys, and the spirits have a presence, which is unusual and surprising for the European eye.”

Alexei Goncharneko about the production "In the Eternal Light of Kumalan"

“If you look at the productions of Erdeni Bato-Ochirovich, you may notice that the director is interested, in the first place, in folk myths and legends. His productions are based on the information, which he has found, researching the traditions, language, and culture of Buryat people and peoples of Siberia and Far East.” 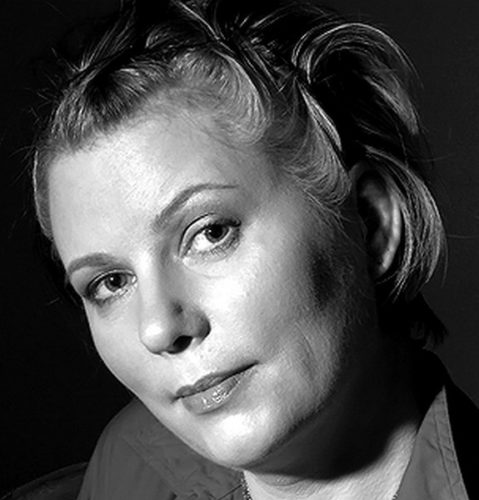 “In this production there are a lot of things which are enchanting, intriguing, touching, and making you laugh: vigorous, organic performance, character puppets-‘heroes’, Buryat speech, sounding like an exotic spell for St. Petersburg audience…”