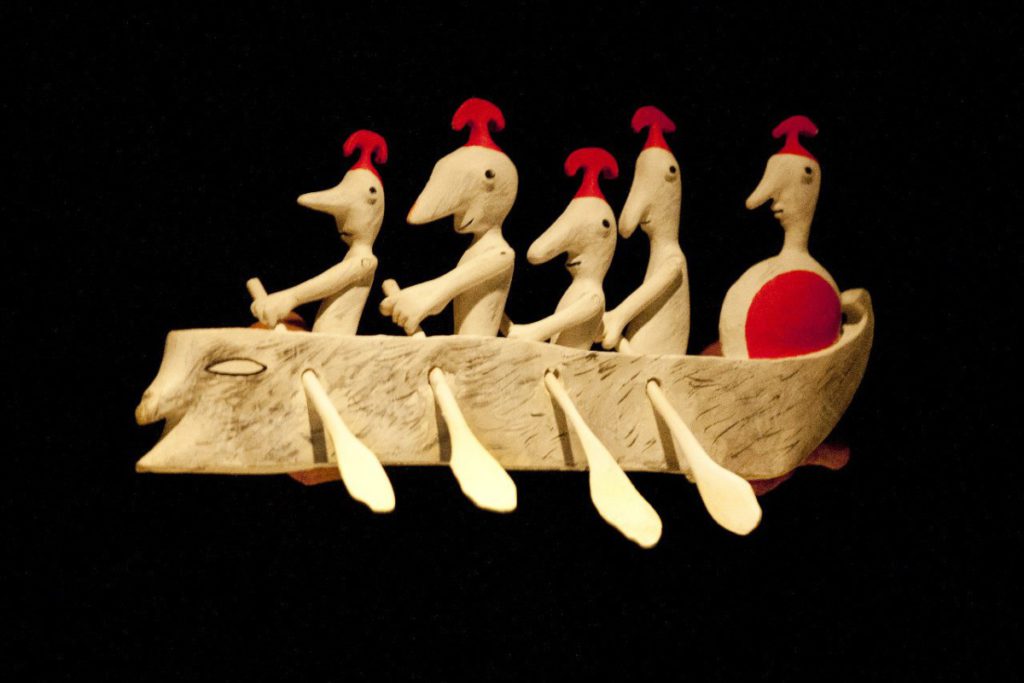 Odysseus cannot die! He just cannot come back home. At least this is what Telemachus thinks. His father has to fight, travel. But he will certainly return as a hero, he will protect his mother from all the dangers.

The story of Odyssey one of the most eventful plots of the world literature is presented in two points of view, as viewed by Odysseus and his son Telemachus. Trojan War, fairy Circe, Island of Cyclopes, Scylla and Charybdis, Island of Helios, return to Ithaca… This suspenseful and swiftly moving story is played by two actors. White barrels on a white stage turn into wild waves, rocks and islands. Stylized figures of Ancient Greek Epic Poetry characters bring us into a fancy world of Homers heroes.

We somehow treat the heroes as inanimate people: as if they were not made of meat and bones, and they have feelings that are peculiar to a person, they do not doubt anything, they do not think about anything. They are all so great, heroic. Such guiding, guiding. Such here they are “heroes”, “great people”.
And when suddenly there was a text in which the opposite was true, I was very happy. It turned out that the story of Homer’s Odyssey can be told in simple, understandable language. Tell the story of the family: Odysseus – father, Penelope – mom, Telemachus – their son. The history of wanderings and expectations. Telling how difficult it is to wait and hope, and how joyful it is to be together. 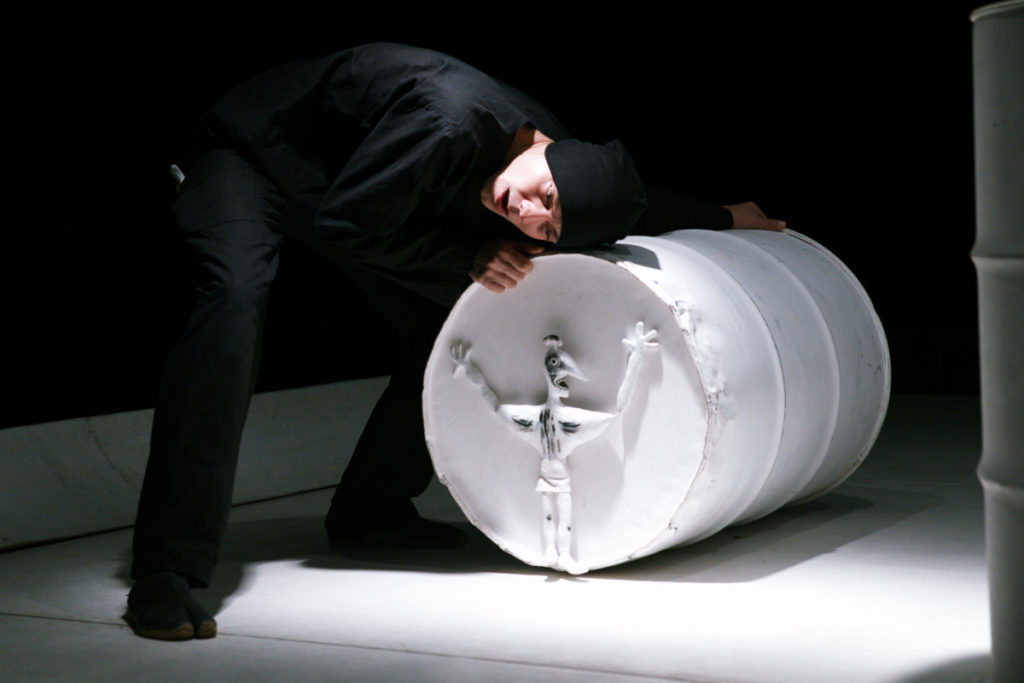 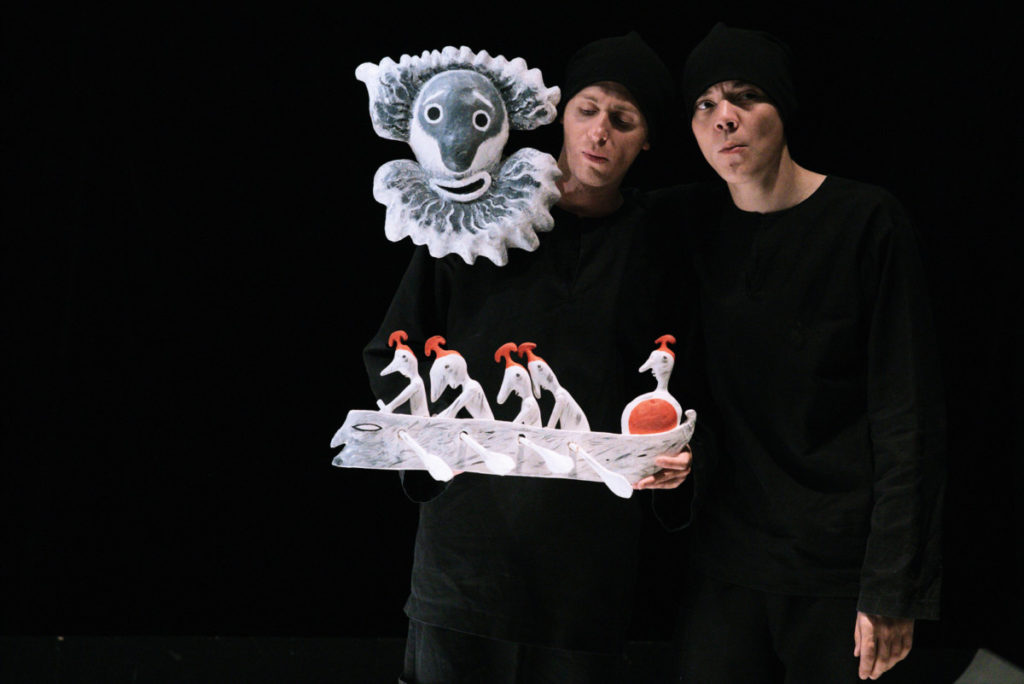 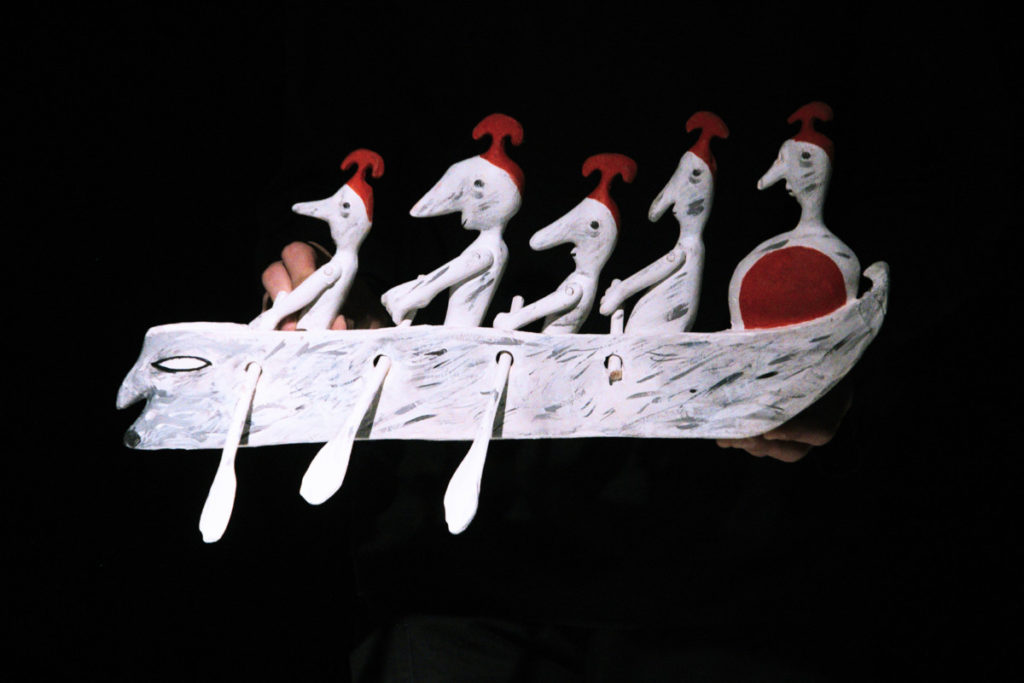 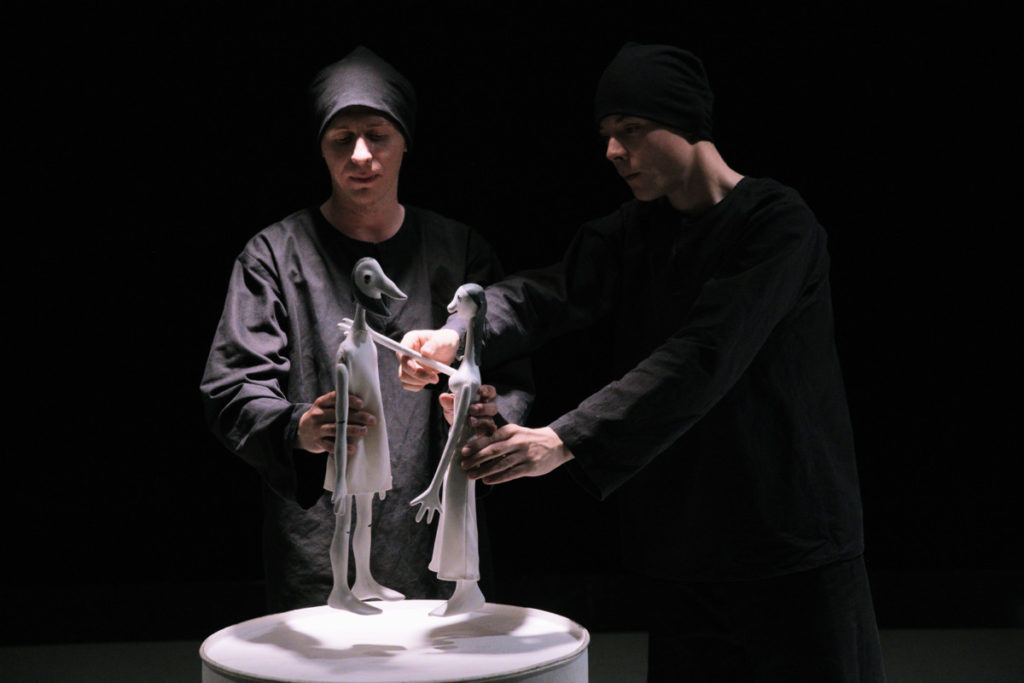 "Director Alexei Lelyavsky changes the idea of ​​the ancient Greek myth as something prehistoric, alien to the consciousness of a man of the 21st century.
The legend of the great hero, who goes to war and returns to his family only many years later, plays two actors on the almost empty stage of a small theater. They speak modern language, with jokes, irony. The place of action is designated only at the beginning of the play: in words "Ancient Greece" freezes in poses resembling images on vases. This is done more in jest, because in the play Lelyavsky myth of Odysseus is not tied to its geographical origin. The director creates a kind of archetype, understandable to us, the inhabitants of another culture, after thousands of years. He again comes up with a story that tells not so much about a famous warrior as about an ordinary man who does not want to leave his family anywhere, but he has to do it. This is a story about a man who really wants to go home, but getting there is not so easy for him. About the husband who gives in to temptation and changes to the spouse, although, as one of the artists comments, "he should have thought about Penelope." The rapprochement with the present is through the behavior of the artist-narrator. This is by no means "homers", not chroniclers, who merely note emotionally what is happening. On the contrary, they do not hide their attitude to the fact that they themselves play on stage with the help of dolls.
The main props with which the actors work are four barrels. They perform the role of ritual tambourines, through which an alarming atmosphere is pumped, then, rolling from wall to wall, they create a picture of the raging sea. But the main thing is the place of action of dolls, white long-nosed wooden figures, with dangling arms and legs. They depict the characters of the ancient myth. Actors work with them in an "open reception."
The events of the original myth on the stage are embodied selectively. Actors play only the most realistic episodes (if, of course, the myth can have "more" or "less" realistic episodes). For example, the audience is told about the adventure with the Cyclops, about meeting with the sorceress, with the many-headed monsters and the story of the sacred bulls. But absolutely fantastic on this background, the episode with a visit to the realm of the dead remains beyond the brackets. Yes, and ends "Odyssey" at Lelyavsky, not as in Homer - the new wanderings of the hero, but like any modern comedy or melodrama - a happy ending "

The direction of storytelling in the Russian theater is becoming more popular. His admirers say that in this way it is easier for children to be attracted to reading classical literature. And when the puppeteers take up the job, they "turn the storytelling" into a comic book, because the matter is not limited to entertaining the story. Director Alexei Lelyavsky and artist Alexander Vakhrameev from Minsk used to notice caustic sarcasm in both the tales of the Brothers Grimm and Chekhov's plays, and they found no difficulty in discovering the humor in the ancient mythology. One room, two young actors, two barrels and dozens of dolls - mean means of expressiveness of this "Odyssey". Disproportionately thin-handed or caricatured snub-nosed, more often flat than bulk, black and white with rare color spots - these dolls can not be serious. Moreover, today they sneer about their ancient origin from the heroes of the ancient Greek vases.

Bouklet of the festival "The Golden Mask"