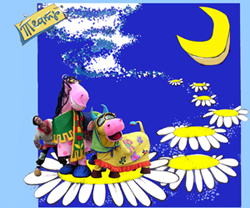 Theatre «Kykli-velikani» was founded by Olga Babayeva in 1988 in Biysk, in the Palace of Culture of the Biysk Oleum Plant, and was initially called “Theater Studio 33”.

In 1990, the studio released its first play “The Forgotten Country” based on the novel by John M. Barry “Peter Pen” with the participation of the first giant puppet.

The first tour of the young theater took place in 1992 in the city of Novosibirsk.

In 1993 the theater became known as the «Kykli-velikani». The title reflects the essence of the work of this unusual collective. To date, the theater’s workshop has produced about 70 puppets.

In 1995, the theater went to its first festival “Heart of Asia”, where it also received high praise for its work. In 1998, the “Giant Dolls” won the Altai Territory Award in the field of folk art, which was awarded to the theater for the performance “The Bride of the Snake Gorynych.”