Puppet theatre of Republic of Karelia

Director: Boris Konstantinov
About the performance Photos Trailer Authors of the production Performers Reviews and media Festivals and Tours Rider

The action takes place in a heavenly workshop where things with personal history are kept: broken instruments out of use, rusty cans, nuts, and bolts, and springs. It is here that the old Zaporozhets car, the cheapest of cars produced in the Soviet Union, tells its story – the story not of cold iron scrap, but of warm human relationships, full of faith, hope, and tenderness; the story of love. The main characters are the most common of Soviet people: she sews, he repairs, but even in their lives there is room for dreams and romanticism… 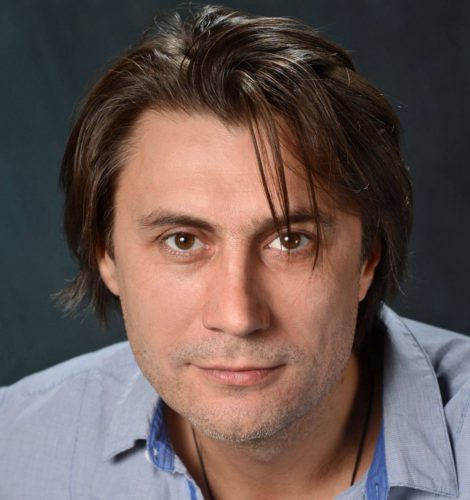 “The whole action begins in a car shop: a paradise for an outdated iron.” The viewer comes into the hall – we do not close the curtain – and he immediately sees the fragments … And the iron is picked up so that you understand: it’s a little out of that era. , today’s viewer (if the child comes with his parents, and we do not mind that it was a family viewing) will see the scales – those scales of that time, they stand on the front stage. He will ask the question: “What is it?” And mom, dad, grandmother. grandfather can explain to him, that is, already little by little to immerse the viewer – a small spectator, a young spectator – at that time. The keys, the damn wheel – in his small model – that is, some elements of recognizable iron from that time. Iron symbols of the era. And the most important symbol that will appear after some time on the court is the main character of our fairy tale: Zaporozhets. He is also an image of the play. and the narrator. From his face is a story … “ 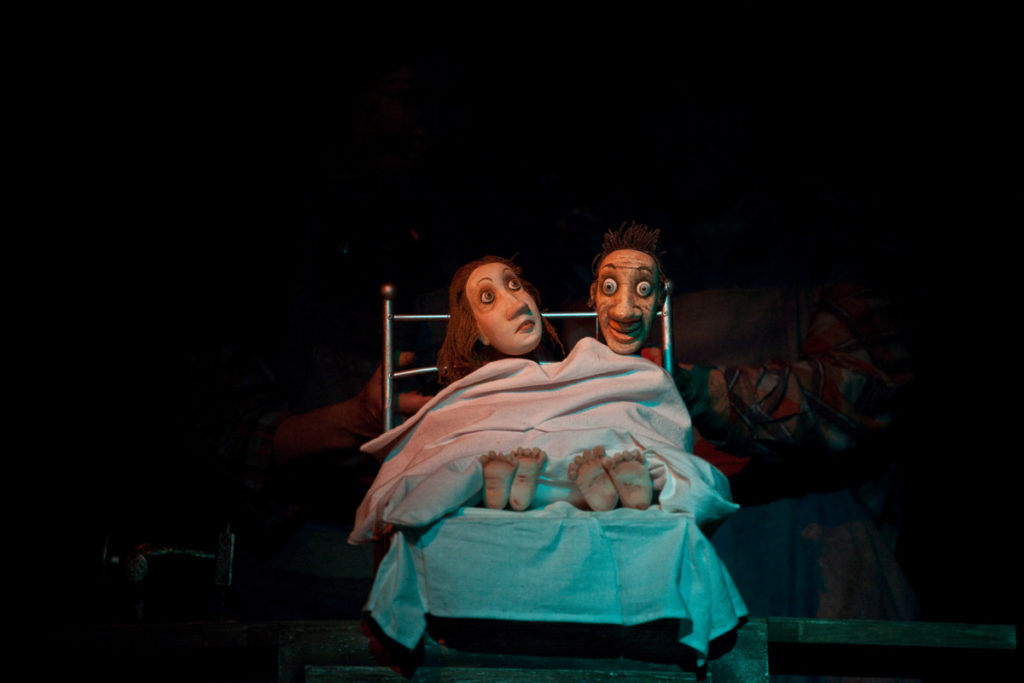 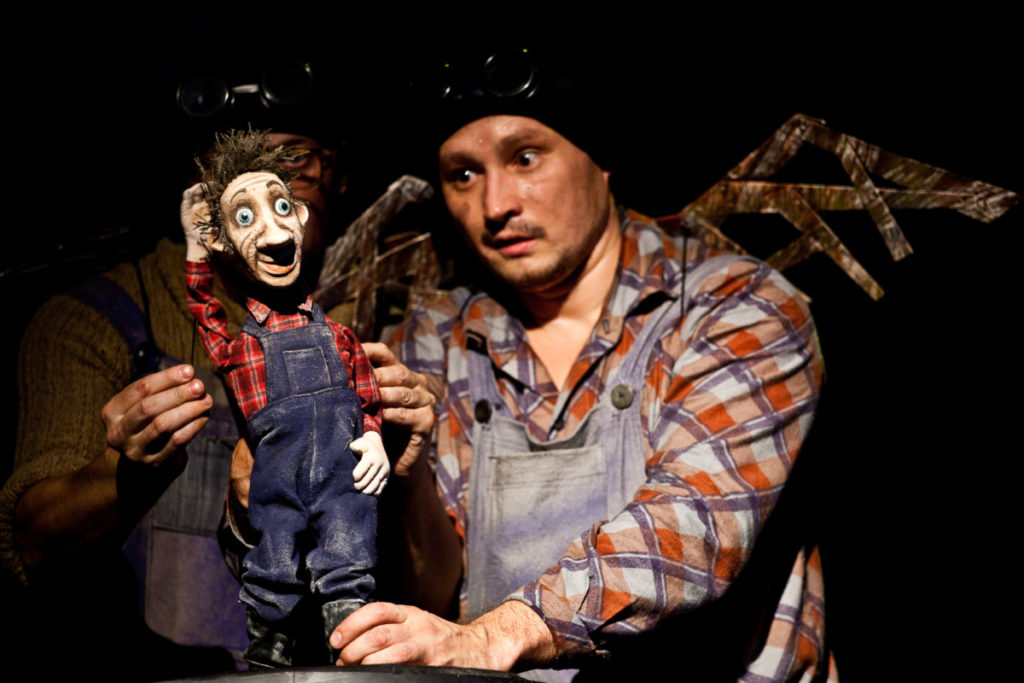 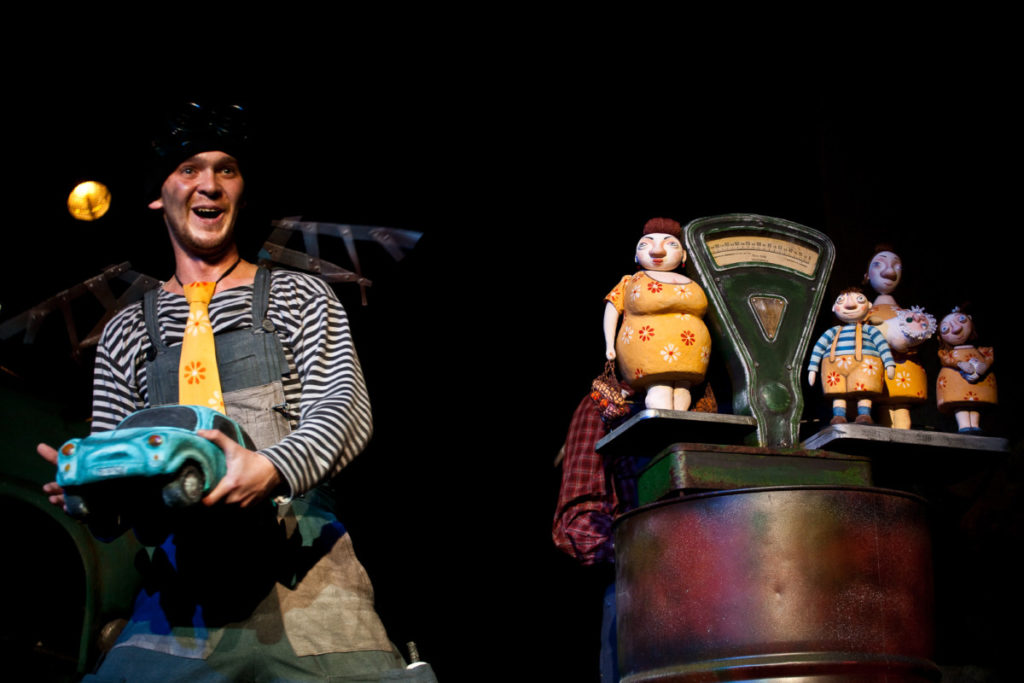 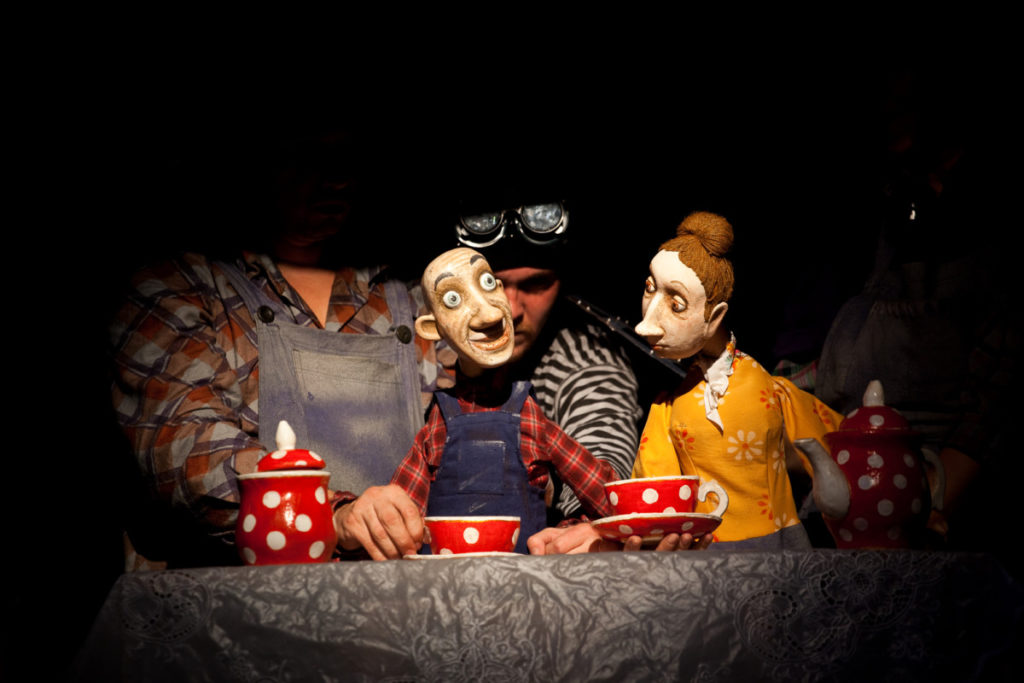 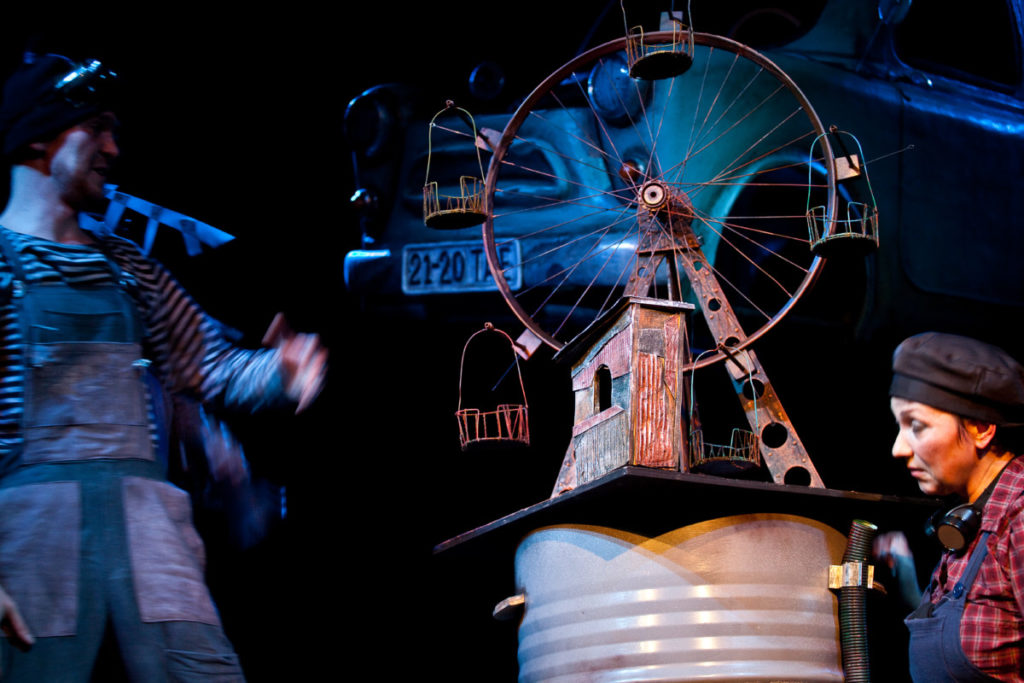 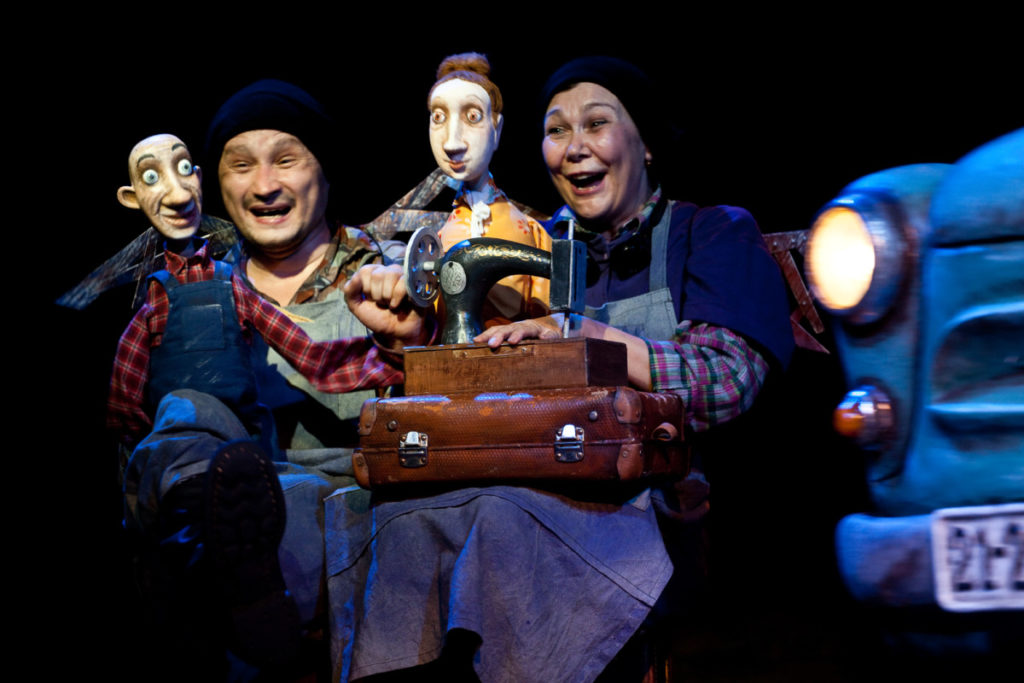 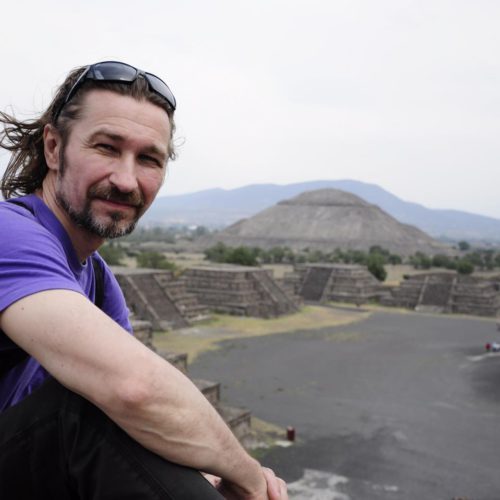 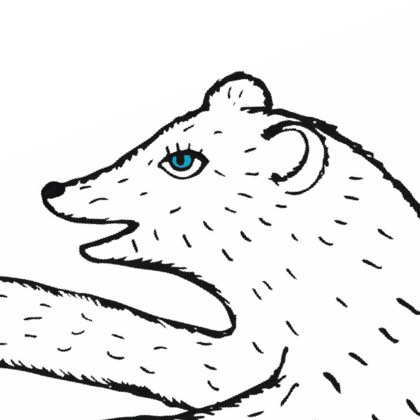 ".. The main thing in the play is puppets and scenery, all actions are unfolding nearby, inside and under the car.It is the embodiment of a dream, the culprit of tragedies and family quarrels.This interesting director's reception even more creates a sense of the atmosphere of the 60s of the last century when they saved on the refrigerator, the Polish wall (or as here - on the sea with palm trees), and around it life was formed. Zinochka and Veni's dolls are small and growth, which are already run by two or three people. For the director this was also an important point: detail in the play From the very beginning of the performance Venya and Zina are guarded by angels, they help, guide and symbolize eternal life, and when the couple still gets to the sea, then the angels ... It is their images without words that speak eloquently: on this journey does not end, but only begins " 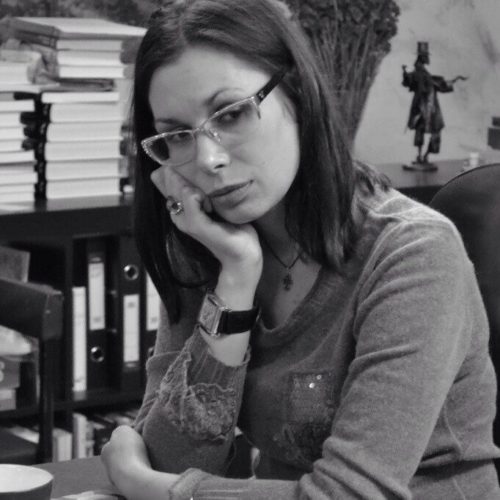 "On the beautiful and clean as the tears of the Komsomol, the aspirations and desires of Soviet people, the endlessly gentle performance with the unrealistically brutal title" Iron "Boris Konstantinov puts on the nostalgia of the Russian man." Iron "is a declaration of love for the cult project of the automobile industry ... one family, one car, inside of which there are different stories.His Cossack, represented on the stage, is life as such.There is something happening in each part: in the apertures for the wheels - a ticket office was formed in which they sell tickets to heaven, on that sama south with palm trees and sea, on the hood - the beach, in the cabin - the house, etc., etc. The dream car, the car-comfort, the car-everything. The car is a life where they are always happy and satisfied, where "The complete idenity of all and all." The idyll, her mother's leg: I, my wife and a miracle car, are all well, and all are good "

"Cars, sewing machines and even scissors have their own paradise, and the smelly angels-mechanics are filling it in. The central place in the composition is given to the old humpbacked Zaporozhtsya. And it is with his eyes-headlights we look at the life of the elderly loving couple who sees him happy for compared with the noisy family of a man with a guttural mother-in. In the play directed by Boris Konstantinov and artist Viktor Antonov, the atmosphere is more significant than the prescribed drama and a built-up conflict, this is the atmosphere of nostalgia for the youth that has come for the time of avosec and worn carpets with deer, when the whole city could walk in clothes from one scarce piece of cloth with flowers.In this "afterworld" the words of the trambler and carburetor sound like poems, the accident appears as a spectacular dance number, and family quarrels look like sitting with Fantasy about the Rulov family is an example of a puppet theater for a wide range of adult viewers, in which they can also love iron. "

"God in Detail" is about the performance of Boris Konstantinov and the artist Viktor Antonov. The narrator in the play of titled puppeteers is an old car that has lost its parts. Namely, "Zaporozhets" with the nickname "Humpbacked". They assembled the "Iron" on the basis of the idea of ​​the Rostov playwright Sergei Medvedev. It occurred to him to tell about love, loyalty and eternal values, extracting them from under the hood of the car - the main material value of our ancestors. Konstantinov and Antonov invented an action in the heavenly workshop. They called the genre the "journey from the past to the fake". In their inventive and sentimental work, there are a lot of nuances, but that's the main thing: performances of the puppet theater for adults are rare, but they do exist. And another such performance, which should be watched by the whole family, together with children and old people, is simply not found "

Bouklet of the festival "The Golden mask"

Laureate of the Prize of the Government of the Republic of Karelia in the field of culture, literature and art for 2015
Award for the best performance of the season at the local festival "Onega mask"
Artist Victor Antonov became the winner of the "Golden Mask" in the nomination "The best work of the artist in the Puppet Theater"